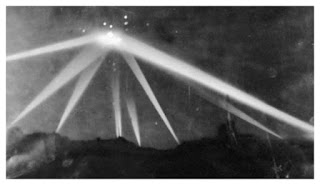 It has been called a "soft disclosure," meaning the military is leaking bits of information on UFOs to the public rather than making a major announcement and causing a panic.

This April, the U.S. Navy acknowledged guidelines for how their pilots can report encounters with anomalous ships without fear of reprisal. This comes after a New York Times article about numerous sightings of Tic Tac-shaped UFOs around the USS Nimitz south of San Diego. According to a spokesman for naval operations, there has been an overall "uptick of interaction with aerial phenomenon" since 2014.

There have been less controlled responses, too. Over two million people have signed up on Facebook to storm Area 51 on September 20 to "see them aliens."

Multiple UFOs sightings have been reported since the atomic bomb was developed in the 1940s. Yet there have been no reports of actual attacks or threats to wipe out our civilization. In fact, according to many who have studied UFOs, extraterrestrials have worked to stop us from self-annihilation.

They point to three alleged incidents of UFOs shutting down our nuclear missile bases. In 1967, Lieutenant Robert Salas, a commanding officer at Malmstrom Air Force Base in Montana, reported that a hovering UFO disabled 10 missile silos on his watch. He said he saw it as an anti-nuclear war message...read more>>>...
On August 21, 2019