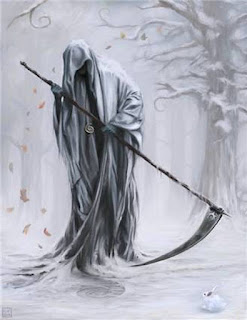 [Mysterious Universe]: Throughout history and across cultures there have long been tales of entities signifying the avatar or personification of death itself. These spirits, gods, whatever you want to call them, have taken many forms, but in many Western cultures this is the distinctive entity of the Grim Reaper.

A tall, hooded, shadowy thing with its face concealed and carrying a scythe in many incarnations, it seems as if it must all be surely a piece of legend and myth. Yet, there are many cases of people who claim to have actually come across this specter of death, and they have quite the stories to tell.

There are actually a surprising number of accounts of people encountering cloaked entities that seem very much keeping with the image of the literal Grim Reaper in both appearance and behavior.

Of course this entails the entity appearing before a person’s death, and sure enough there are numerous tales of encounters seeming to herald such a tragedy...read more>>>...
On August 15, 2019