Facebook ‘News’: A bold step toward total control of reality? 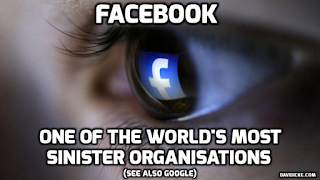 [David Icke]: More than two thirds of American adults get their news from social media at the same time that more than half expect that news to be "largely inaccurate."

Perhaps sensing a business opportunity, Facebook has moved in to manage that news consumption, reportedly offering mainstream outlets millions of dollars per year to license their content in order to present it to users authoritatively, as "Facebook News" – having long since ceased trusting users to share news among themselves.

But trusting Facebook to deliver the news is like trusting a cheetah to babysit your gazelles – all that's left at the end is likely to be a pile of bones. Facebook CEO Mark Zuckerberg warned legacy media last year that if they did not work with his plan to "revitalize journalism," they would be left dying "like in a hospice."...read more>>>...
On August 10, 2019