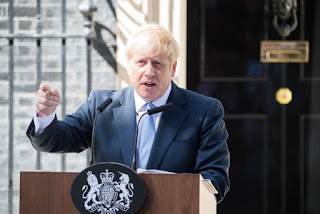 Really? There's so much deliberate spin, so much deliberate bullshit and deceiving. There is a clear problem-reaction-solution 'we did our best, this is all we could get for you' smokescreen going on here. There's not just one rat to smell, but an entire lair. Oh dear!

[David Icke]: Boris Johnson is threatening to sabotage the EU to make it cave in on a Brexit deal – or reject MPs’ plan to stop the UK crashing out of the bloc. In a dramatic escalation of its battle with Brussels, Downing Street believes it has devised a way out of the crisis to make the EU no longer “legally constituted”, paralysing its decision-making.

The extraordinary plan would see the UK refuse to appoint a commissioner, putting the EU in breach of its own legal duty for all 28 member states to be represented on its executive branch.

No 10 believes the UK would be “disrupting” Brussels life to such a degree that member states will then make it clear they will refuse to grant an Article 50 extension – even if asked for.

A source said: “We will turn the pressure onto the EU to show how difficult it will be for them if the UK is still hanging around.”