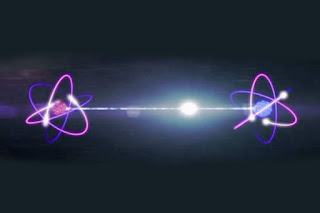 [Waking Times]: Many scientists believe that by tapping into the entangled potential of quantum mechanics, humans will usher in a new frontier of scientific and technological innovation.

Chinese scientists are rumored to be working on a quantum Internet that will radically transform our online universe; quantum supercomputers are said to be the next major shift in computer technology. And just last month researchers announced a big development that suggests the long-fabled dream of quantum teleportation is closer to reality.

The discovery marks the first successful teleportation of a complex, 3-dimensional quantum state. Austrian and Chinese scientists working at the Austrian Academy of Sciences and the University of Vienna say their work represents a proof-of-concept that demonstrates the potential for scientists to use qutrits, as opposed to qubits. Qutrits mark the superpositional state of a 0, 1, or 2 and can carry a much larger information payload....read more>>>....
On September 09, 2019