St Greta of Thunberg – Her Gospel Is Pure Propaganda; Her Cause Is Evil 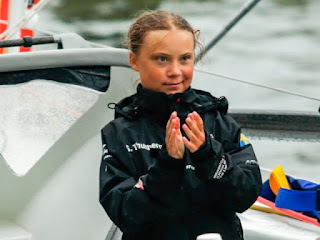 [Briebart]: St Greta of Thunberg – Patron Saint of the Age of Stupid – has made landfall in the New World, there to preach to the unbelievers her gospel of imminent climate doom.

“The war on nature must end,” she has declared, to anyone who is listening.

Though St Greta has become a figure of huge influence in Europe – feted by Popes, presidents and prime ministers, lauded with uncritical coverage in the mainstream media, put forward for a Nobel Peace Prize – it seems likely that in the United States she will get a more mixed reception.

The problem with Greta Thunberg is not that she’s a 16-year-old girl with pigtails.

The problem with Greta Thunberg is not that she’s a school drop out.

The problem with Greta Thunberg is not she’s autistic.

There are hundreds of thousands of other kids around the world with some or all of these features – and none is being criticised for having them.

No, the problem with Greta Thunberg is that no matter how brave or inspirational or articulate or touchingly young and fresh-faced or triumphant-over-mental-adversity she may be, the “facts” she regurgitates on behalf of her controllers are lies, propaganda and fake news – and the cause she represents is downright evil.

Strip away all the fluffy invocations of nature and the plight of future generations and the alleged crisis facing mother earth and what you find underneath is pure totalitarianism.