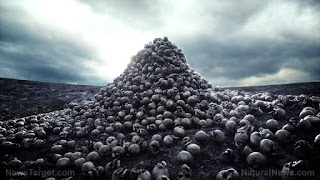 [Natural News]: For the last five years, we’ve been warning that scientists are using the climate change hoax to pursue a planetary depopulation agenda that aims to eliminate billions of humans from planet Earth.

The assertion has been predictably mocked by the CIA-run fake news media as a “conspiracy theory,” even as those same media outlets fabricate their own baseless conspiracies about Russia, Trump and the 2016 election.

Today, the media is once again eating crow as a new science paper, reportedly signed by 11,000 scientists, demands the world’s governments take action to eliminate billions of humans from our planet. (“Democide” is the term describing mass genocide carried out by governments, by the way. In the last century or so, governments of the world have already mass murdered 262 million people. Apparently, that’s not nearly enough, according to genocidal climate scientists.)...<<<Read The Full Article Here>>>...
On November 06, 2019