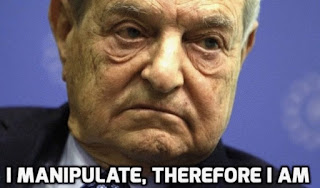 [H.A.F]: George Soros financed radical environmental groups partnering in this week’s “Global Climate Strike” to the tune of nearly $25 million, according to a new report.

At least 22 of the left-wing activist groups listed as partners in the Global Climate Strike received $24,854,592 in funding from liberal billionaire George Soros between 2000-2017 through his Open Society Network, Joseph Vazquez reported Thursday for the Media Research Center.

Though ostensibly ignited by the protests of 16-year-old Greta Thunberg, the Global Climate Strike has borne from the outset the indelible fingerprints of well-funded, radical environmental activists. As it turns out, much of the funding has been coming from professional disrupter George Soros...<<<Read The Full Article Here>>>...
On December 09, 2019