The Looks In Their Eyes 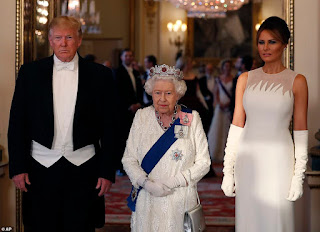 A memento from President Trump's state visit to the Uk. A photograph of him with The Queen and the First Lady.

Having studied this photograph very closely, there is something very haunting about the look in their eyes. Something quite menacing. The First Lady looks horrified. Donald Trump has the 'I'm still taking it all in' look. And The Queen looks quite angry/agitated.

Wonder what they had seen, done or discussed prior to this photograph? All three appear to have some knowledge/information that is being withheld from everyone else; but they are privy to it. They do look like they are all trying to fool the human vermin. All is not what it seems in this photograph, and other photographs too.

This photograph is taken from a series of photographs in the Daily Mail. Further down the article, a number of 'dignitaries' are photographed arriving in the backs of their chauffeur driven cars. The women in the photographs, especially Brigitte, The Duchess of Gloucester, appear to be like rabbits caught in the headlights. Something very menacing in their looks, and in their eyes. Something is clearly afoot ... there is contempt and 'the realisation what we've planned for' in the looks. Very disturbing and very sinister. It's almost as if 'The Elite' (The 1%) don't want to be seen in public ... they look like the would prefer remaining in the shadows.

Totally agree......glad not just me......veil over what?....the press lies on "special relationship"....soon to burst like Trump Baby balloons? Worrying and unbelievable.....dislike being force fed false hype as if I am an idiot.