It's a wrap: Russian satellites to become invisible from Earth 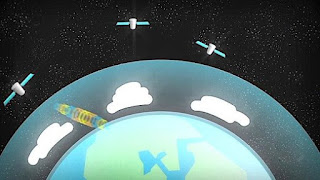 [S.O.T.T]: Russia's space agency claims to have found an unconventional way of equipping its satellites with stealth features, effectively making them hard to spot from Earth. A special wrap may be the solution, they say.

Roscosmos has invented top-notch technology which involves covering satellites with a unique air-bubble wrap that scatters light, Russian media reported. The method is said to reduce the satellite's visibility by 10 times or more when observed by telescopes from Earth.

The agency says the technology - which seems to be of dual use - could be employed to 'hide' satellites traveling at 10,000km to 20,000km above Earth's surface.

Russia, the first country to have sent a satellite into orbit, recently unveiled new technology involving the unmanned spacecraft. Just this month, Roscosmos presented a solution to the growing problem of space debris - a satellite that would destroy itself at the end of its lifetime.

The new type of satellite would feature materials that sublimate, meaning they transition directly from solid to gas without becoming liquid...read more>>>...
On August 18, 2019