The Censorship of Alternative Media Is Virtual Book Burning 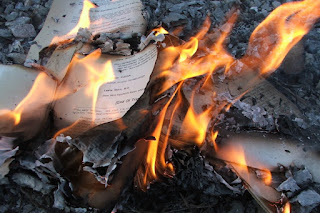 [Waking Times]: These days, as more and more people turn to the internet for essays and news, dissenting views are more often found online than in paperback.

And there are people in power who want this to stop because particularly after the last election, they’ve seen the power the internet has to change the entire course of a country.

Big Tech and Big Media hold most of the microphones and they like it that way. They tend to be united politically and they’ve been busily working toward silencing opposing views on the internet, branding them as “dangerous” or “ignorant.” Members of the alternative media, writers of alternative health news, and opinion bloggers are being censored at a rapid clip.

How is silencing opposing views on the internet any different than burning a library filled with inconvenient information?

The first way is called de-platforming. This means that all of the places where a person or entity was once able to be heard are taken away. Next, they attack the earning potential of websites. Soon, the sites under attack are only able to be located if you’ve bookmarked them....read more>>>...
On August 20, 2019