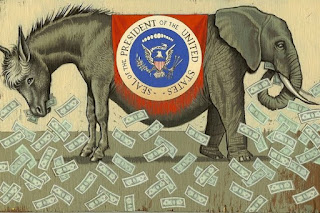 [Waking Times]: The two-party system is an illusion. It is a facade. It is a false paradigm. It is a tool of divide and conquer; a distraction; a mimicry of constructive discourse.

What common interests do continual political battles, inspired by political leanings, promote beyond the grabbing of votes by politicians who climb and step over each other in a frenzy for the attention of television cameras?

Sure, the politician broadcasts their position on an “issue” that is aligned with their “side” of the political aisle. This issue is, of course, a narrative backed by moneyed interests. Would a politician be inspired otherwise? Absolutely not.

The outlet for the expression of these “issues” is, by the majority, conducted through a medium that guarantees you cannot debate or challenge the narrative in any way such as the mainstream news stations or newspapers.

Mainstream media gives you the illusion of debate by featuring “panelists” or “experts” going at each other over a subject.

Do not believe for a second that an opposing side is not controlled opposition. It is. Mainstream news stations want to maintain their viewership within their demographic. They do this by winning the debate for their “side” every time there is a debate and they do this by controlling the opposition....read more>>>>..