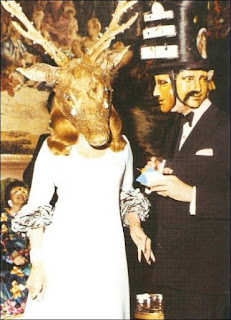 [Humans are Free]: Have you seen the film Eyes Wide Shut? If so, you may recognize some of what you are about to see.

In part, the film chronicles a man named Bill Harford who discovers an elite secret society and the type of behaviours they exhibit during their “parties.” Certainly there is much more to the film, but this is the important note when looking at the photos you are about to see below.

Many believe that Kubrick was trying to warn the world about the occult elite and its depraved ways with the film Eyes Wide Shut as he would have had access to this knowledge given his stature as a director at the time.

Why the title Eyes Wide Shut? Well, our civilization as a whole still has its eyes wide shut, and it’s said that Kubrick was trying to say this about humanity’s widescale knowledge of the elite. Kubrick died just two weeks after the film was released.

Many feel the film Eyes Wide Shut is incomplete and not quite the film Kubrick would have wanted to put out had he still been alive for the final cut. Had the scene been added to the film, it may have told a bit of a different story.

According to Eagle Scout and noted filmmaker David Lynch:

"I really love Eyes Wide Shut. I just wonder if Stanley Kubrick really did finish it the way he wanted to before he died."

Some feel it was a conspiracy in itself that Kubrick died even before being able to properly release the film. That perhaps ‘someone’ would have wanted things left out or not fully told....read more>>>...
On September 10, 2019