Atlantis Find Debunked (as was expected in truth)

The image - discovered on internet mapping tool Google Earth - lay in an area of the Atlantic long thought of as a possible location for the city. Experts were agog, marine geologists baffled and internet bloggers were buzzing. 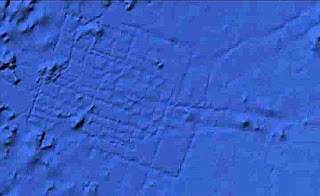 There were just two problems, however. First, the grid of streets, walls and buildings turned out to be the size of Wales. That meant Atlantis was 20 times as big as Greater London. More problematic still, the grid of lines doesn't exist on the sea floor.

According to Google, the pattern is an 'artifact' of its map-making process. Details for the ocean maps on Google Earth come from sonar measurements of the sea floor recorded by boats - and the area around the Canaries was mapped by boats travelling in a series of straight lines.

The grid can be found by anyone using the latest version of Google Earth on their computer. It lies in the Canary Basin, 620 miles west of the Canary Islands, and east of the undersea Konstantinov Ridge.

'It's true that many amazing discoveries have been made in Google Earth - a pristine forest in Mozambique that is home to previously unknown species, a fringing coral reef off the coast of Australia, and the remains of an ancient Roman villa, to name just a few,' said a spokesman for Google. 'In this case, however, what users are seeing is an artifact of the data collection process. Bathymetric (sea-floor) data is often collected from boats using sonar to take measurements of the sea-floor. The lines reflect the path of the boat as it gathers the data.' The grid was spotted by a British aeronautical engineer who claimed it looked like a 'man-made aerial map' of a city.

Bernie Bamford, 38, of Chester compared it to the plan of Milton Keynes, the Buckinghamshire town built to a grid design.

Dr Charles Orser, curator of historical archaeology at New York State University said the site was 'one of the most prominent places for the proposed location of Atlantis. 'Even if it turns out to be geographical, it definitely deserves a closer look,' he added. (Daily Mail Comment from Daily Mail article (which sums it all up really): 'Everytime a major discovery is uncovered we get told oops we made a mistake its nothing really, for example the missing 11 minutes of the moon landing where the astronauts were describing buildings on the moons landscape, it was heard by millions then subsequently deleted, or the many ancient underwater cities lying off cuba , japan, and another 6000ft below sea level near Florida. )
On February 23, 2009