The old written sources about Seidr are found in the Edda and the sagas, and often it is not at all clear if they describe myth or this reality or both. Some key points in the Seidr practise are never mentioned, and the descriptions are often heavily biased. Here is a brief introduction to the bare bones of Seidr, just enough for a basic understanding. 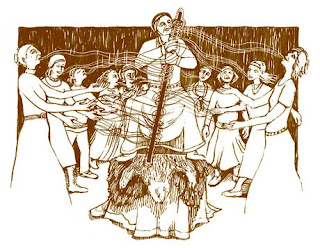 In its blooming days, a thousand years ago and more, the Northern shamanic tradition of Seidr was practised mostly by women, called volvas, Seidr-wives, sp -wives, or wise women. The volva is often described as being past her fertile years, and unlike other women she has no clan- or lineage-name. The Seidr has its roots in the fertility cult around the goddess Freya, and the ceremonial form of a Seidr seance is quite unique. The volva does her shamanic work sitting with her staff on a highseat, or platform, a Seidrhiallr. The staff is important, but it is never said what for. The volva is surrounded by a circle of people, who sing the Seidr songs, the spirit-calling songs, the magic chants, but no chants are written down. It is this ecstatic song which changes her state of consciousness, carries her into trance on a journey. When the song ends, and the volva is still suspended between the worlds, she is in a state to prophesy, to divine, to answer questions about future and fate, receiving her knowledge from the spirit realm. Seidr has been used mainly for divination, but in some accounts the volva's close link to Freya and the powers of fertility shines clearly through: In the story of Thorbi"rg Lillvolva, the volva is called because of the famine and the barrenness of the land. In Landn mab¢k another volva gets named "Filler of the Sound" because she made the herring return to a fjord they had disappeared from. The Seidr is thus used to bring plenty, to restore balance between people and nature. In some accounts Seidr is used for harmful magic, to send somebody illness or misfortune. Here we must remember that the literature is very biased, written by christian sholars often opposed to this heathen practise. But of course the Seidr practitioners have been faced with the same fundamental ethical choice between using or abusing power as shamans are everywhere. What we can read between the lines is: If one can send harm, one can also send healing. In short, Seidr can be used to gather and send power.

The Seidr song as portrayed in the literature is unmistakably shamanic and has shown me a lot about magic singing in general. Song and chanting has been a dimension in shamanic practise always and everywhere, and song shows up all by itself for anyone who starts on the path of shamanism. It is said that the Seidr song was ecstatic song. Ecstasy means a state where you have let go so much of ego, control, and convention that the power of the universe flushes through you unhindered. And that is the first trait of shamanic singing: that you sing from a source that is bigger than yourself, and let power flow through you as song. In other words, the song is sung in an altered state of awareness, or in trance. And when we start to sing like that, we can experience a marvellous shift in our voice, our breathing and endurance, the power and effect of our utterance. The song sings us. There is a second trait of the ecstatic song that makes it shamanic: the song has a definite purpose. We sing open the doors to the otherworld. We sing out to our spirit helpers, so they may know we're calling them. We sing to a tree to honour its beautiful power. We sing the invisible threads between us and our spirit helpers stronger. We sing a mound open, so we can talk with our ancestors. We sing pains and spirits of illness away. We sing thanks to the plants we harvest. This gets us to the third trait. Shamanic songs or chants are not composed or constructed. They are found, heard, gotten, when we are in-spired. They arrive, arise, and unfold. [More...]
On February 28, 2009