Many Buddhist symbols need to be considered within the culture of the people who follow it. Therefore, many of the early symbols relate to ancient India and can be found in Hinduism as well, although possibly with a somewhat different meaning. 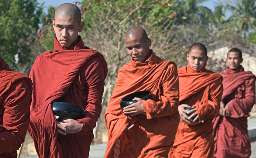 The historical Buddha lived around the sixth century BCE, but no Buddhist artifacts are known from before the third century BCE. In the scriptures, it is mentioned that the Buddha did occasionally use images like the 'Wheel of Life' to illustrate the teachings. The first archaeological evidence, mainly of ornamental stone carvings, comes from the time of the Emperor Asoka (273 - 232 BCE), who converted to Buddhism and made it a popular religion in India and beyond .

In the second century BCE, people started to excavate Buddhist monasteries in rock, creating a large amount of artwork to withstand the ages. Probably the earliest typical Buddhist monument is the stupa, which was often specially decorated. The first actual Buddha images appeared around the first century BCE, so until then the artwork was largely symbolic in nature.

With the appearance of Buddhist Tantra around the 6th century, a wealth of new artwork and symbolism appeared, as imagination and visualization form a major technique in meditation practices. From this moment on, a pantheon of deities and protectors appeared, together with a vast collection of symbolic items, such as the vajra and bell, mandalas etc.; see the page on Tantric Symbols. This tradition was mainly preserved in so-called 'Tibetan Buddhism', and partially in the Japanese Shingon tradition. (Source: viewonbuddhism.org)
On February 21, 2009