A Word on 'The Anunnaki'

A complex mining operation was begun in southeast Africa which later required human hybrid slaves. Because their planet goes far out into space, these beings are in darkness and misery much of the time; when they approach the sun again they delight in visiting our planet Earth with the feminine essence of the Goddess so vibrant and living upon her. 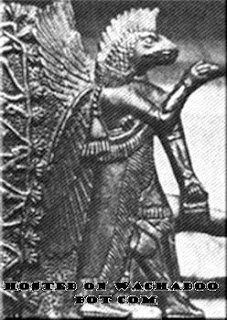 There is evidence of these visits throughout ancient history, particularly in the Sumerian culture.When the Anunnaki and their God, Anu, visit our planet they interfere with its natural rhythms and nature. Since they are of a different origin, which is more advanced and they live for thousands of our years; they have manipulated us by genetic experiments and consider us like guinea pigs, or as slaves for their gold mines.

It is said thousands of our years past, they took the gentle and docile Hominid species we know as Homo Erectus and bred a human hybrid from their own DNA. This explains the famous "missing link."

This hybrid human did not have the capacity to breed, being a slave needed only for mining. Later one of the Anunnaki, Enki, loved man and gave man the ability to reproduce. This was the fall from the Garden of Edin apparently. We lost the protection of the Anunnaki once we were able to reproduce our own kind, and man as a species has been evolving himself since with periodic visits by the Anunnaki who have given ample evidence of a love/hate relationship to man.

For example, in a fit of anger, Anu created the great flood to destroy man completely on the earth, but Noah again with Enki's help, survived in the ark along with the animals. The Anu gods also created a nuclear war in Ur because of their volatile anger and violence. Such has been our history with this temperamental, angry, mean and jealous progenitor, seeming a lot like the Greek Zeus.

How do the Anunnaki influence our culture and our earth history so much?

In the ancient past when man was "homo erectus" he was able to see through the third eye, the pineal gland much as we see today with our eyes. With that innate ability it was no problem seeing the 4th dimensional frequency... the Astral realm where the Anunnaki exist. However, the Anunnaki have considered man their experiment and toy, so there has been much manipulation of our DNA and in many reports, it becomes clear that we were endowed with 12 strand DNA instead of the two we now have.

Our brain is merely functioning at 10% if that of its true capacity. In reducing our capacities for accessing the upper dimensions, in shutting down the third eye, they tried to ensure their secrecy and hidden control and that human beings would remain their slaves/robots, acting out the Anunnaki scenarios of power, war, control, domination, rape and eco-destruction of the Earth.

The tales of the Greek Gods are the stories of ego-maniacs and psychotic episodes typical of the Anunnaki behaviour.Much of this control has been conducted through male secret societies and cabals. Our history bears witness that those who demonstrated the psychic skills to see in the Astral (and expose the deceptive influences of the Aliens), such as crones and witches, were crucified and outlawed. The christian martyrs who lived in the heart and followed the calling of their higher self, were tortured into silence. All this sordid history is coming now to end.Much of our obsession with the "father" god and male domination of the planet has come from the influence of the Anunnaki. These beings do not have goddesses as are found on Earth.

I believe but can not prove that area 51 was a Anunnaki coloney and they are now lose on our world in human form.. Please note how goverments are prepairing the peoples of the world by creatating a domianat class to rule over the world.. What has the leage of nations done sold us out? . To me that appears to be the case.