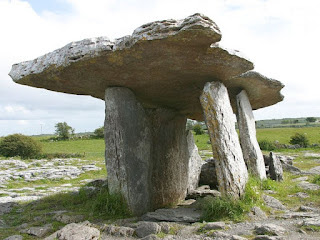 Most date from the early Neolithic period (4000 to 3000 BC). Dolmens were usually covered with earth or smaller stones to form a barrow, though in many cases that covering has weathered away, leaving only the stone "skeleton" of the burial mound intact.

"Dolmen" originates from the expression taol maen, which means "stone table" in Breton, and was first used archaeologically by Théophile Corret de la Tour d'Auvergne. The etymology of the German Hünenbett or Hünengrab and Dutch Hunebed (lit. Huns' bed) all evoke the image of giants building the structures. Of other Celtic languages, "cromlech" derives from Welsh and "quoit" is commonly used in . Anta is the term used in , and dös in .

Dolmen sites fringe the and are found in south-east , , and . In , however, dolmens are more to be found on the west coast, particularly in the Burren and , where some of the more well-known examples, such as Poulnabrone dolmen, are to be found. Examples have also been found in where they may have co-existed with the court cairn tombs. It is thought that the dolmens themselves evolved from a simpler cist burial method. (Wikipedia)