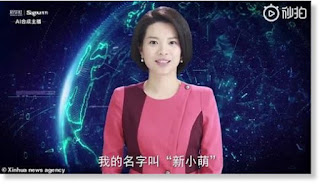 The female AI newsreader will make her professional debut during the upcoming meetings of the country's national legislature and top political advisory body in March, according to Xinhua at a press conference on Tuesday. Modelled after the agency's flesh-and-blood journalist Qu Meng, the AI newsreader was jointly developed by Xinhua and search engine company Sogou.com and can 'read texts as naturally as a professional anchor'.

'Hello everyone, I am the world's first female AI presenter developed by Xinhua News Agency and Sougu. My name is Xin Xiaomeng,' says the journalist in an introductory video...read more>>>...
On February 21, 2019