Fake HATE goes hand in hand with fake NEWS, and it’s all enforced by the censorship of the tech giants 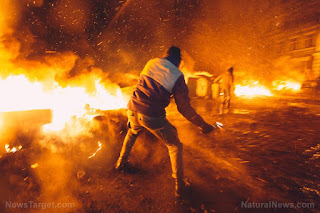 Natural News: Tens of millions of Americans still don’t see it or realize it yet, but the Left has declared open warfare on the civil society, aided and abetted by useful idiots and willful participants in the “mainstream” media (MSM) and tech industry.

At no time since the Civil War or the anti-establishment counter-cultural movement that began a century later — both of which were brought about by Democrats and their Left-wing descendants — have Americans been so divided and so full of irreconcilable hate.

From the deplatforming of conservatives and supporters of POTUS Donald Trump by the social media giants to the endless production of fake news and the perpetuation of hoaxes meant to inflame political passions by the MSM, America is on the precipice of open hostilities by rival factions...read more>>>...
On February 20, 2019