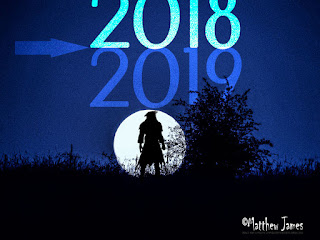 We're edging all but closer to 2019 here in the Northern Hemisphere. We've 5 hours and 45 minutes left of 2018, and we're preparing for our last evening of the old year.

So many of us appear to be offering predictions of wonderment and incredible things for 2019, on Facebook and other social media. Wonderful messages of hope to one another; eternal optimism and forever the positive ones. We would love to share that sentiment, we really would - but it's all superficial, especially as we all have a psychopathic predator breathing on our shoulders.

In order to have this genuine hope for the future, we must all join together in one massive Yellow Vest event ... and somehow overthrow the controllers and instigators of our separatist imprisonment on Planet Earth. This is not going to suddenly happen, sadly. It would be awesome if it did, but there are too many of us in extreme fear - captured by the fear factor- listening to that scared inner voice too much; to permit something drastic to happen.

It'll be no surprise when sometime in 2019, or 2020, the accelerated need for us all to have 5G and A.I dominance in our lives, is pushed even quicker into gear. We fear what next year's new 'must have' technology is going to be. 2018 brought A.I phones; A.I interference in cars and T.V's. The next A.I technology is likely to be ever more closer to Human-computer-technology interface.

We noticed this year that the streets around our local housing estate had no children out playing with any new toys on Xmas Day. It suggests that the bulk of Xmas pressies from Santa were of a technological origin. Which says so much about the future fate of mankind as the nation's kids are brought up with technology being the society norm. It means they can so easily be pushed into V.R technology and A.I dependency.

If that is the case, then we are already lost. 2019 will most surely be the threshold of despair ... and that is so against all the messages of hope on social media. Look, we desperately want to be wrong, but the trends are not looking good ... not good at all ... how do we change the growing trend towards our own destruction? It's in our hands ... its in our mind field ... its within our abilities to think new perceptions. But like we've stated many times before ... mankind has been chemically lobotomised to not apparently give a shit it is going to the slaughter house ...
On December 31, 2018