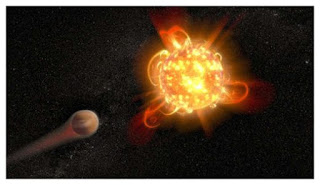 S.O.T.T: The great issue facing the binary theory today is, well, the absence of an obvious candidate for the part. In the visible realm, we do not appear to have any stars near enough that fit the bill, according to our current understanding of physics (Newton's Laws place physical restrictions on distance calculations).

Although it's a long shot, the existence of a visible companion to our Sun could still be possible under circumstances we will investigate later.

We have seen that the idea of a binary, while controversial, is not a new one. References to it in ancient writings and belief systems are there, though largely ignored by researchers and historians. With the majority of stars in the universe (all 1 % of it) being attached to binary or multiple star systems, the obvious question is, why wouldn't our own Sun have a partner star as well? Statistically, it's not at all likely that our Sun would be a loner. To many astronomers, though, the binary idea is an annoyance that just won't die. They may ignore or disagree with the theory, but at the same time can't disprove it...read more>>>...

No long shot really. Ancient texts are clear about the existence of another sun. The earth more than likely orbitted two stars. The symbol of infinity, or the classic Zin and Zang image,, suggests the ancient knowledge of a binary star system and the passage of Earth between the time of darkness and light ... two stars.
On December 25, 2018