Archangel Raduriel (Radueriel, Radweriel, Vretil), serves as an Archangel of the Third Ray of Harmonics Restoration; as well as, the Cosmic Benefactor Archangel Chieftain of the Environment Omniangels. 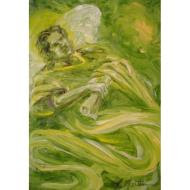 Archangel Raduriel comes to this local universe after many millenium of distinguished service as an Archangel in another local universe that has always been aligned with Divine Will, Divine Harmony, Divine Authority, Divine Love, Divine Light, and Divine Power.

As a higher heavens realms Adjudication Registrar, Archangel Raduriel (Radweriel) was a Cosmic Chronicles Recording Angel who was notably gifted with a powerful bounty of co-creative poetic wisdom. She was also the Mentoring Counsel angel of the poetry and song muses, as well as, the celestial choral singers.

Archangel Raduriel was the Chief of the Phoenixes angelic order. The Phoenixes attend the Earth as it takes its chariot ride around the sun, continually greeting the rising sun with melodious, sweetly sounding songs, as elemental sunshine radiance blesses the landscape in different planetary locales.

As Vretil, she was considered the wisest and most knowledgeable of the Archangels, so the heavenly spheres treasury of sacred books, scrolls, treatises was entrusted to her safekeeping.

Referred to in the lore of Ezra and 2 Enoch, Vretil was depicted as a knowledgeable heavenly spheres scribe. Enoch wrote down what she revealed to him in many books over the course of many days. Archangel Raduriel serves as the Cosmic Benefactor Archangel for the Environment Omniangels and is Co-Chieftain Mentor of Archangel Zadkiel.

As an Archangel Raduriel brings vigilant purity, friendly divinity, and pristine storytelling to the Third Ray of Harmonics Restoration.

She watches and inspires seekers of sagacious epics with poetic mastery, as they proceed, step by step, from solo happenstance singularity to choral concurrent unanimity... (Source: archangelswisdom)