'Euthanasia by the back door': How doctors give 2,500 patients drugs to accelerate their death every year

Some 2,500 patients a year are given drugs to accelerate their death in what critics claim is euthanasia by the back door. A survey has found that the lives of one in 200 terminally-ill patients are ended in this way. Of that number, at least 10 per cent die up to a week earlier than they would have. 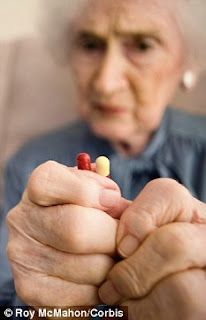 More than 80,000 are subjected to deep sedation, where they slip into a drug-induced coma before dying. Supporters of assisted dying warned of a 'slippery slope' of patients being helped to die even though it is illegal. They called for the practice to be legalised to ensure the deaths are regulated.

However, the poll of 4,000 doctors found that only 34 per cent would support a change in the law proposed by former health secretary Patricia Hewitt last week. The survey was carried out by Clive Seale from the Centre for Health Sciences at London's Queen Mary University, and published in the journal palliative Medicine.
Professor Seale said: 'This research shows stark differences between public opinion and that of doctors. Elsewhere in the world, opposition among doctors has been a major factor in preventing the legalisation of euthanasia or physician-assisted suicide.

'The Dutch medical association in the late 1980s and 90s was moving towards the view that euthanasia was an acceptable way of dealing with certain forms of suffering. Dutch medical opinion was influential with the government.' He added: 'Cases of euthanasia in the UK are very rare. Instead, end of life treatment decisions are often taken with input from patients and family, and it is rare for such decisions to have shortened life by more than a day.'

Soapbox Comment: Having sadly gone through the experience of my late Mother deteriorating with Terminal Cancer, I was relieved for her sake (and the family's sake too) that her dose of painkillers were gradually increased, so in the end she did not feel the terrible pain she would have done without them. I was so grateful to the Hospice for the way she was looked after ... and also grateful she slipped away in her coma sleep without any suffering ...
On March 25, 2009