Sometimes learning takes traditional forms. We hear or read something new and add it to our personal store of knowledge. Yet many people have also experienced a more subtle shift of awareness. At times it seems as if a new idea is simply in the air and that we need only 'tune-in' to be a part of a new consciousness. 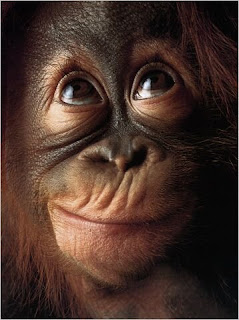 One hypothesis suggests that if enough individuals are on the same wavelength, awareness will spontaneously spread to new individuals from mind to mind. Scientists observed a specific species of Japanese monkey on the island of Koshima for a 30 year period and discovered some fascinating data that supports this concept.
Initially, the scientists provided the monkeys with an edible treat consisting of sweet potatoes dropped in the dirt.The monkeys enjoyed the potatoes but found the dirt unpleasant. Soon one resourceful monkey found that by washing the sweet potatoes in a nearby stream, she could improve the taste of the food. Before long, she had taught the trick to several other monkeys, who also happily adopted the habit of washing their dinner before eating. The trend spread quickly with the younger monkeys, while many other monkeys persisted in eating the dusty potatoes. This continued until one particular day when a certain number of monkeys - let's say 99 - had all adopted the washing habit. On that day, the hundredth monkey learned to wash his potatoes. The added energy of the hundredth monkey had a remarkable effect on the rest of the tribe as almost all the monkeys on the island promptly adopted the new method.
Surprisingly, the momentum created by the hundredth monkey even spread to colonies of monkeys on other islands and on the mainland. These new groups of monkeys, divided by a sea from the original tribe of monkeys, also began washing their sweet potatoes before eating them. The new tribes had somehow absorbed the new washing system through a communal shift of thought that became known as the Hundredth Monkey Phenomenon. When a certain number of individuals achieves a new awareness, it may remain the property of a few. But there is a point at which if just one more person absorbs the information, it becomes available to the world at large.
The Hundredth Monkey Phenomenon brings hope and purpose to individuals and small groups who may feel powerless in their life journey. Through sharing knowledge, we can help spread new forms of positive thought throughout the world. And who knows if you may be "the hundredth monkey" who helps turn a quiet trend into a giant step forward for humankind.
On March 30, 2009