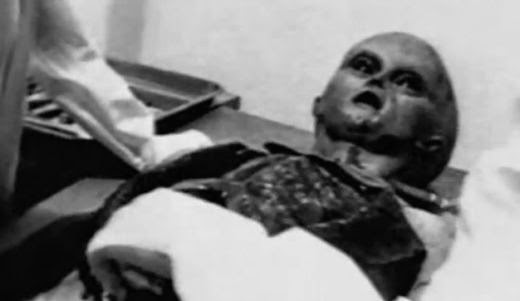 The 'Roswell slides' story is the latest ufological brouhaha making waves online. Roswell researcher Tom Carey claims to have the slides, and is planning to release them next year (see the link for more background). Real?

.. some time ago a chest once owned by a deceased couple was found to contain a stash of old slides, including two Kodachromes of special interest. Depicting a small humanoid corpse, these extraordinary slides were authenticated by a renowned Kodak expert as having been exposed in 1947. This author discovered that the husband was an oil exploration geologist who worked the New Mexico region in the 1940s for his company (a Texaco predecessor) including in the Permian Basin, a region encompassing Roswell. He was also the President of the local geological association in 1947. ... Over two years have been spent in securing experts, researching the back story, conducting interviews and scientific tests and in arranging the forthcoming televised broadcast of the slides. During the course of all of this, leaks had occurred to the UFO community about the existence of the slides. ...Read More>>>...
On December 01, 2014