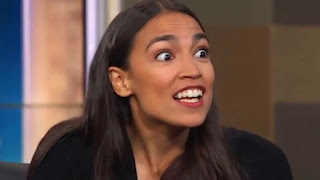 I'd not paid much attention to AOC in truth. I'd noticed mention of her on Twitter so I decided to look a little closer at the stories. She appears to be nuts! Sorry, but she does. She is another Greta Goldilocks ...picking up on half truths; 'a little knowledge is a dangerous thing'; firing bullets like the gunman who fires bullets then talks later. She is one of the new breed of  'human turkeys' that are pushing mankind closer to the brink of needless genocide.

[Natural News]: America’s dumbest socialist is back on social media spewing sexist, pseudoscientific tripe in a feeble attempt at sounding smart, while also supposedly defending the so-called “right” of women to murder their unborn children through abortion and infanticide.

According to the wine-damaged brain of Alexandria Ocasio-Cortez (AOC), getting pregnant is somehow the same thing as having an abnormal menstrual cycle – and anyone who disagrees with her on this is apparently a man who doesn’t “know the first thing about a woman’s body outside of the things [he wants] from it.”

AOC’s latest ignorant statements – which, of course, are a perfect match for Twitter where she shared them – come in response to Georgia Governor Brian Kemp’s recent signing of a “heartbeat bill,” which bans all abortions after six weeks gestation in the Peach State.

In case you didn’t know, six weeks gestation is right about the time when an unborn baby’s nose, mouth, ears, beating heart, and other distinctly human features begin to take shape and show up on an ultrasound, proving that he or she is a real human baby as opposed to a “clump of cells.”

AOC loves to showcase her stupidity concerning pretty much everything

Naturally, a slew of people with actual functioning grey matter were quick to challenge AOC’s patently false assertions about pregnancy and missed periods, explaining to the freshman congresswoman and certifiable lunatic the basics about what actually happens during pregnancy....read more>>>...