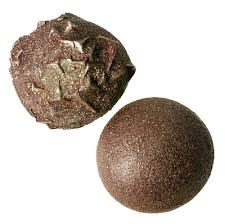 Boji Stones. It is said that Boji Stones™ originate from only one place in the USA and they grow like mushrooms. Only one male stone grows for every seven females! The male is the rougher looking of the pair whilst the female Boji is smooth. They are best used in pairs but you will often see the females made into pendants. (Mystic Mouse)

The Boji Stone is as old as the earth. The formation of the stones and the creation of the earth were simultaneous thus making the stones millions of years old. They are primarily made up of pyrite, which gives them their blackish-brown color and are flat and spherical in shape. There have also been studies showing palladium in the stones. Boji Stones are derived from only place in the United States at Smoky Hill Chalk Member of the Niobrara Formation in Gove County, Kansas.

Metaphysical Properties of Boji Stones
-Primarily used to balance and align ones energy field.
-They aid in moving energy from the subtle body to the physical body.
-Help to recharge the aura and fill empty space with positive energy.
-Promote the removal of blockages to allow healing to take place.
-Facilitate the balancing of the male and female energies in the body.
-Assist in aligning all of the chakras from the crown chakra to the root chakra.
-Improve the body's electrical structure by creating an electromagnetic field around it.
-Used to facilitate clarity in the brain. This can increase the functioning of the brain by up to six percent and also helps to recover short and long term memory.
-Used to promote the regeneration of cellular tissue that has been damaged. (Healing Stones Healing Crystals)

As Shaman Stone Healing Stones, they are high energy stones and are powerful allies to have for personal path workings and for healing. In personal matters the stones can connect the shaman with earth energies. They are powerful in grounding and energies. The stones can be used for contacting and interacting with our animal spirit guides.

The stones are powerful protectors, they can absorb negative energy and transform it in to positive useful energy. If one stone is placed at the crown and another is placed on the soles of the feet, the shaman stones can purify and normalize the flow of chakra energies in the one being treated. The stones seem to have a positive effect on any area they are placed over.(Healing Stones Healing Crystals)