Is Global Famine On Dinner Plates After Autumn 2019 Courtesy Of Weather Geoengineering? 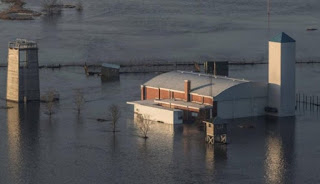 [David Icke]: Is Weather Geoengineering a Reality or a Conspiracy, and why should we, who the globalists call ‘useless eaters’, be concerned?

First and foremost, whoever had the chutzpah and financial resources to construct the Georgia Guidestones apparently thought it was within their sense of morality to tell the world what’s probably being programmed for the future of we, useless eaters and sheeple, when this was chiseled in stone as the first of the new ten commandments establishing the New World Order:

Maintain humanity under 500,000,000 in perpetual balance with nature.

That’s half-a-billion humans! Currently there are 7.7 billion humans on the Planet! How, and when, do they plan “to off” most of us? Wouldn’t ‘age-old-famine’ automatically be media-reported, plus ‘sold’ as an Act of God or blamed on Mother Nature screwing around with the weather?

Mother Nature doesn’t act that way; Nature, when left to her devices, always allows for recuperation time. Remember the Noah flood or Mount St. Helen’s. However, when man-made technology interferes with Nature, we really do not know what to expect. What impacts do billions of microwave RFs have on everything?

However, many theorists are inclined to blame “climate change” on humans. That’s absolutely correct! Is it not New World Order globalist corporations funding weather geoengineering; airplanes; and even passenger jet airliners ...?? Yes, the same Globalists that are pulling the media strings ... releasing the likes of Greta Goldilocks and 'Extinction Rebellion' into our midst trying to get us to agree to voluntary genocide.

Hey, it’s supposed to be springtime. However, it’s damp, dark—almost like at the pre-sunset hour; raw—bone-penetrating raw temps—at midday with temperatures ranging anywhere from the low 40s to 50s, depending upon location. Geo-engineered rain is falling—as most days in the last 2 years—all day long from microwave-produced scalar clouds. What a waste of ‘programmed’ water resources, which could be “meteorologically delivered” to the West Coast of the USA, that’s if weather programming geoengineers were generous and didn’t want to negatively and agriculturally ‘strategically’ impact the premiere fresh food (fruits and vegetables) growing state in the USA.

Yesterday began as a cloudless, dusky-clear-blue sky, with the blessed SUN shining overhead. I think everyone in the region was out and about basking in the luxury of SUNSHINE! Then, about 4PMish, 2 weather engineering planes flew overhead creating one spectacularly HUGE letter “X” in the sky above, which spread into an all-encompassing cloud cover apparently filled with high-energy microwave scalar cloudsto usher in today’s “unseasonable” weather. Nothing here regarding weather is normal anymore; even radio commentators make remarks! By the way, this pattern will last until Wednesday, May 15th, when the Sun and near normal temperatures are predicted to return. Then the apparent pre-programmed weather pattern probably will be rain or thundershowers daily, as has been the normal spring weather pattern in 2019.

The 2018 growing season in Pennsylvania was a disaster for many farmers.

If the same geo-engineered wet weather patterns of the 2018 growing season will be dumped upon Pennsylvania AGAIN during the 2019 food growing season—wet planting spring and a wet autumn harvest time, will we lose more of our local farms and farmers—is that the ultimate plan, especially for those committed food producers who practice organic farming? Is a pattern starting to present, which no one seems to be recognizing, nor doing anything about, specifically here in the Commonwealth? Why aren’t ‘progressive’ legislators highlighting obvious weather disasters similarly to how they tout socialism? Who’s bridling opposition to what is apparent ‘weaponized weather’?

But Pennsylvania is not unique!

Texas and Pennsylvania seem to have similar flooding weather patterns.

Recent winter and spring 2019 weather all across the USA ought to become more apparent than a wake-up call to we, who are involved with … eating food. Is there a clarion-type, food-production disaster developing within the USA agricultural system? Cui bono? Big Ag and Factory Farming!