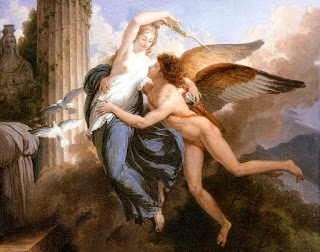 [David Icke]: Portals all across the World are being conjured in greater and greater quantities. Sooner or later, the bubble will burst, and the World will be taken like a thief in the night. But then what thereof?

One rider is named Death, and the other is called Life. Together, they oil Nature’s mechanism.

Silent we hear the gears turn and elapse another moment, slowly creaking open the door to the Otherworld. Every 13,000 years, Atlas adjusts his shoulders, and the cosmic pendulum swings its force into a new direction. This time, the World drops down and dips into the Feminine Nature, giving rise to all sorts of mystical, unreasonable agendas. Eccentricity expands the Veil’s elasticity, going further than what it is used to. The bands that prevent the worlds seeping into each other wear quite thin, and droplets, and even sploshes, drain into whatever pocket has the least tension. And, mind you, our World carries many pockets, where the seams stretch along the ley lines, and the holes are needled through by moths on the Outside.

Owed to the natural order of the Universe, this expansion enables such demons to press their faces against the very fabric of our Souls, like moths to a flame. Communication is as easy as the ocean, telepathically and virtually, whereby Aquarius translates its genius into great minds to manifest both the concept of an interconnected Consciousness and the invention of the Internet and its free-flowing Wi-Fi fountains and chambers. As thin as a spider’s web, anything with enough force may funnel a hole through this electric Matrix into our living and breathing World. Predictably, it is happening. Portals between worlds have and are surfacing across the planet, loosening the Veil to prepare for its rupture, for its rapture. All over, these gates draw closer and closer to each other as they multiply, appearing to be clustered gnat clouds of black, celestial tornadoes.

This very idea tickles our subconscious fancies, and so many of us pursue the search for the paranormal and the supernatural. We see these desires ricochet into our movies, TV shows, storybooks, fashion, video games, and frequent conversations. How normal is it now to play games and watch shows about grotesque, nonhuman other-dimensional entities; to see a film about demon possessions; to ghost hunt? How many times do stories feature a Rift that opens its plot in one way or another? From Dragonlance to Shannara to Silent Hill to Stranger Things, we are showing our Selves the very predicament our World is in. As the moths dominate our everyday living, our Subconscious dreams them up, and we give them life, for what is a shadow without its light?

Drearily dystopic as Purgatory it may all seem, Change has a curiously bizarre way about her. While she vacuums the World, the Soul, into darkness, in equal proportion a great light enchants that darkness. The Light of the Soul, the Radiance of the Inner Child. When the World eclipses, its luminescence becomes magnified, thereby clearing immovable boulders from our Being’s own Mount Meru to climb onward to its Crown. Evolution is bound even as the Veil surrenders to apocalyptic chaos. And while fluoride and smartphones madden our experience, the spiritual denial of our Heart will ultimately blind us and prevent our entrance back into the Garden of Eden...read more>>>...