EE to launch UK's first 5G service in May 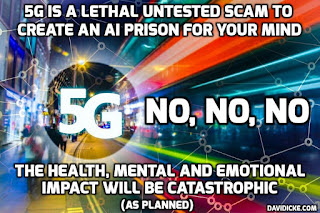 AND SO BEGINS THE CULLING. It's too late for goodbyes ... welcome UK to human genocide at the hands of an untested lethal weapon ...

I personally will NEVER set foot in Manchester again. I value my life too much. I will avoid journeys to any of the other cities listed here too.

[David Icke]: EE will switch on its 5G service in six UK cities on 30 May, the first mobile network in the UK to do so.

People in London, Cardiff, Edinburgh, Belfast, Birmingham and Manchester will be first to get faster services with plans for 10 more cities to be added this year.

Prices for 5G - which will require new handsets - will start at £54 per month for 10 gigabytes of data.

EE confirmed that its range of 5G phones would not include Huawei.

"We're pausing the launch of the new Huawei 5G smartphones coming to market," said a spokesman, adding that EE is working with both the Chinese firm and Google to "make sure we can carry out the right level of testing and quality assurance" for customers.

It follows a decision from Google to bar the smartphone maker from some updates to the Android operating system.

"This is the start of the UK's 5G journey and great news for our customers that want and need the best connections," said Marc Allera, chief executive of BT's consumer division, which owns EE.

It admits that this is just phase one of its roll-out, with "full next-generation 5G" not available until 2022.

Rival Vodafone plans to launch its 5G service in July. It has also withdrawn Huawei's 5G-enabled Mate 20X - from its line-up of phones.

Retailer Carphone Warehouse has also said it will not allow customers to pre-order Huawei's 5G handsets.

Several other countries have announced 5G services, including South Korea and the US.

Kester Mann, an analyst at research firm CCS Insight, said: "In getting 5G as soon as next week, the UK will have completed a remarkable turnaround from laggard to leader."' ....Read More>>>...
On May 22, 2019