How many people will have to DIE for AOC to complete her “Green New Deal?” 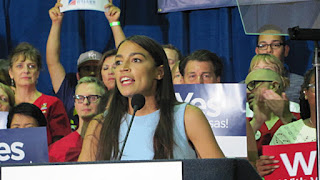 [Climate News]: There is no shortage of scrutiny for Alexandria Ocasio Cortez’s controversial “Green New Deal.”

Experts say the financial burden of AOC’s plan would send the United States spinning into economic ruin — but the cost of the Green New Deal may be even greater than the almighty dollar. Some pundits are now suggesting that the price of the plan put together by AOC may ultimately be paid in human life.

Writing for All News Pipeline, John C. Velisek alleges that the Green New Deal will take the United States “back to the Stone Age,” and will require “millions of lives” to be sacrificed — a sacrifice he posits the Left is more than willing to make. Climate change theory has been consistently called into question by independent science, but adherents to the global warming narrative continue to champion their cause, and all the tyranny they’re trying to shoe-horn in with it, as “necessary” for the good the planet. Many skeptics argue the global warming agenda is driven by fear — not facts — by design, and is a movement more entrenched in advancing government interests than protecting the environment.

While AOC may be spewing lies about climate change being a matter of “life and death,” Velisek argues that the Green New Deal really is that serious.

“As we see now with our Bartending climate ‘expert’, anyone can parrot the climate change lie. She and many like her are willing to sacrifice millions of people for the radical environmental agenda based on falsehoods and lies,” Velisek writes.

Velisek is one of many pundits sharing their concerns about the real cost of the Green New Deal. Greenpeace co-founder Patrick Moore also recently spoke out about the pitfalls of AOC’s not-so-brilliant plan to upend the U.S. economy, stating it would be “the end of civilization” as we know it.

“The Green New Deal will be the end of civilization if 85% of the world’s and 85% of the US coal, oil and natural gas were fazed out over the next few years, like the next ten years. We do not have anything to replace them with… Half of the population will die in a very short period of time. And as I also pointed out, there wouldn’t be a tree left on this planet… because that would be all there was to heat and cook.” ...read more>>>...