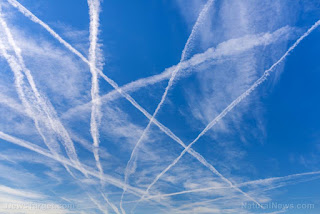 Having witnessed the worst chemtrail skies over our local area in the UK, EVER, it’s time to bring the Chemtrail Cover Up back onto the table here on The Light Of Truth.

As I was travelling north along the M6 motorway, I could EASILY count 53 separate chemtrails. NOT contrails, which dissipate immediately... these were the traditional white trails that line the sky for a considerable time; the chemtrails collectively then crisscrossing before dispersing into a fine smog like cloud that smog out the sun.

This has been happening more and more extensively around the world since the late 1980’s and has been deemed pure conspiracy by the ignorantly minded and skeptical human beings on this planet.

Sadly, the phenomenon is very real and clearly part of the UN Agenda 2030 and Fake Climate Change movement going on. Biological life is being poisoned and genetically changed forever by a sinister secret project! It’s not for the good of us or the planet that this white toxic shit pours out of the back of unknown planes in the sky!

It’s time to return to this serious issue again. IF there is still material to find on the net that discusses it. Otherwise we will rehash what we have on here.
On May 14, 2019