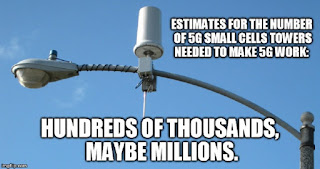 [David Icke]: The city of Syracuse, New York is embroiled in a fight over whether or not to allow Verizon to install 5G wireless networks throughout the city. Some city officials are citing 5G health risks as a cause for concern, while others believe that 5G will put their city in a position of technological progression.

Verizon’s regulatory manager, Mark Coon, is fighting the notion that 5G is a risk to public health.

However, the council says it is experiencing internal rife over the matter, with some members fully opposed to 5G. Some councilors have pointed out that places such as Portland, Oregon have attempted to blocked 5G network installation until more studies are accomplished.

“I think it’s worth exploring that further, because I don’t think we have a great view, at this point, what the consensus is,” Councilor Bryn Lovejoy-Grinnell said. “We have an obligation to make sure that our citizens are safe and that this technology doesn’t pose a risk of danger to them.”

If Verizon triumphs, at least 100 5G networks are expected to be installed throughout the city. Officials who back Verizon claims this would help Syracuse become a leader in technologies such as autonomous cars.

The public trust in government agencies to make responsible decisions in concern with public health is embattled and nearly eroded. The 5G controversy is expected to be a long and hard fight between activists/citizens and government agencies/telecommunications companies. The motivation for cities and telecommunications companies to install 5G runs high. It stands to be an extremely profitable venture for all involved. The issue, of course, is whether or not such profitability and technological advancements come at the costs of public health and safety...read more>>>...
On May 13, 2019